Sebastian has been found! 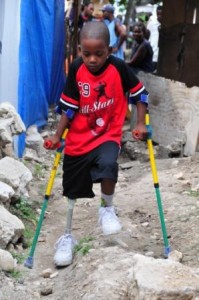 I wrote in an earlier blog (April 17th) about an 8 year old boy I met in Haiti – Sebastian. He lost his home, family, and his leg in the earthquake. I last saw him swinging on his crutches out the Port au Prince Hospital gates.

I wondered what would become of him, and if we would ever see him again. I worried that once he disappeared into the chaos of the tent cities he would be gone.

Our community work in the tent cities have not only found him, but he has been provided with a prosthesis for his missing leg.  He is living with an uncle and aunt, and considering what he has been through, doing well.

There still will be so many challenges ahead of Sebastian. School, livelihood for his new family, and a home are hurdles that he, and so many tens of thousands, will have yet to face. Yet, his future has started. He does have a prosthesis, is in a program, and will be followed.

Sebastian has been found!