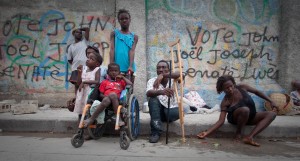 Why does God allow suffering? This was the obvious question around the earthquake in Haiti. I had a ringside view of different answers. I was privileged to travel in Haiti with Lorna Dueck from “Listen up TV”.

The answer Lorna received in Haiti was relatively simple. God is not to blame if humans built poorly constructed homes on known fault lines. An earthquake of the same magnitude in California killed around 50 people while in Haiti the number is in the hundreds of thousands. This is a human error – people should know better. Haitians themselves gave this answer – often. One can go on to look at the link between poverty and these types of human error – but the consensus in Haiti from Haitians was you should not blame God. There’s enough blame to go around!

I have been in many disaster areas – both natural like the Haiti earthquake and political disasters. I was in Iran in 1990 and saw a village of over 15,000 people destroyed by an earthquake – leaving less then 2,000 living. I witnessed the Kurdish people fleeing Iraq in 1991, trapped in the mountain passes between Turkey and Iraq and dying of exposure. I’m still haunted by the pediatric wards in Iraqi hospitals during the decade of the 1990’s, where needed medicines were being denied children by macro-politics. Floods in Mozambique, mud slides in Nicaragua – the list could go on. There is a human component to all of these – human decisions which led to enormous pain. It is difficult to blame God for these disasters.

When I think of these events – two things jump out at me. First, it’s almost always the innocent people that suffer for these human errors – like the children in those Iraqi pediatric wards or the ones in Haiti who lost limbs. In Africa there is a saying “When elephants fight the grass is trampled.” Children don’t make decisions of where to live and how to build a home. Children don’t have a choice in which country they are born, who their leader is, or which countries don’t like each other. Yet it is too often the children that die, are left in wheelchairs, or grow up without parents because of these things. Our decisions have an effect on others – almost always innocent people. This is a huge burden.

That is why I was in Haiti. That is why I have gone to Iran, Iraq, Gaza, Mozambique, and Nicaragua. That is why I will work in Tanzania, Malawi, Sri Lanka now to do things to prevent disasters, and mitigate suffering. After all – this is our calling to follow Christ.

How should Canadians care about Haiti?
Going home to Africa…!